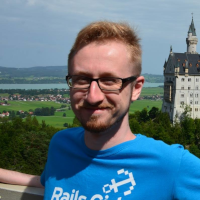 Hi, my name’s Andrew and I’m a programmer. You can find me as “AndrewRadev” on github and on twitter.

Professionally, I code mostly in Ruby and Rails. In my spare time (and very non-professionally), I try to play around with all sorts of other stuff: Image processing, gamedev with Unity, opengl and webgl, Android, electronics, and any fun programming-related thing that crosses my path.

Recently, I’ve been building most of my side-projects in Rust. I’ve grown fond enough of the language to start teaching it in Sofia University. I’ve got a bunch of half-baked experiments, but a few usable ones as well:

I don’t have that many published Ruby gems, compared to how long I’ve been working on the language. I guess working professionally in it means I tend to focus spare time on other things. Here’s a few of my projects, though:

I’m a dedicated Vim user and I’ve created quite a few Vim plugins. I maintain the VimLinks twitter account, I’m one of the maintainers of the official ruby bindings for vim (but I’m pretty bad at keeping up with the work there), and I own the runtime files for Vim’s eco support.

A few of the more interesting ones:

I’ve got a playlist of Vim-related screencasts, mostly of my own plugins or setup:

Occasionally, I speak at conferences, and I’ve put most of the videos in one youtube playlist. Most of them happen to be in Bulgarian, but if it has an English title, it should be in English: